Review: The Ups and Downs of a Gunner: My Life Story

Albert Figg has a story to tell, and it's a good one. His memoir, The Ups and Downs of a Gunner: My Life Story, is a quirky, no-nonsense look at how an ordinary man became caught up in an extraordinary time.

Born in Wiltshire, England, in 1920, Albert was the youngest of eleven children. His childhood was spent learning how to milk cows and harvest hay, frolicking in the fields picking blackberries and apples, going to school, and getting into mischief with his friends. But when Hitler came to power in 1933 and in the years that followed, Albert became intensely aware of the rumblings of war coming from Germany. And in February of 1939, to avoid being drafted, Albert enlisted with the Royal Artillery, 112 Field Regiment, of the Territorial Army.

During the war, Albert trained in preparation for the invasion of Europe, climbing to the rank of sergeant in less than three years. He and his crew landed on Gold Beach at Normandy on June 24, 1944, and would go on to be involved in the attacks on Hill 112 as part of the 43rd Wessex Division. Following his service in Normandy, Albert participated in Operation Market Garden and the Allied advance into Germany. After the war ended, he became part of the British Army of Occupation Rhine. He was discharged in Februrary of 1946. 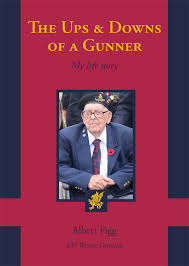 The Ups and Downs of a Gunner also delves into Albert's post-war life. He details post-war Britain and the political upheaval that occured after the war, as well as his new role as a father and husband. In his later years after his children were raised and he retired, Albert focused on memorializing the 43rd Wessex Division and remembering the sacrifice of those who fought on Hill 112, a mission he still continues today at the age of 97.

What is most enjoyable about Albert's book is its folksy, down-to-earth style of storytelling. It's easy to imagine Albert telling you his tale while the two of you sit ensconced in wing-back chairs in front of a roaring fire on a chill English evening, with tea and biscuits close by. Albert is witty and charming in his descriptions of his life, and his anecdotes are vivid and at times, downright hilarious. Yet when the subject arises, Albert does not shy away from the horror of war.

This is a heartwarming, fun read about an Englishman's life before, during, and after World War II. Thank you, Albert, for writing your story.

For more information about Albert, please visit his website: http://www.albertfigg.co.uk/the-ups-and-downs-of-a-gunner/
Written by Melissa Amateis at 6:42 PM