The Devil's Alliance: Hitler's Pact with Stalin by Roger Moorhouse


The pact between Hitler and Stalin in the early days of World War II registers as only a blip to many Western historians who study this period. Perhaps it is because there were not many works that provide such a comprehensive and detailed study on the topic, but Roger Moorehouse's The Devils' Alliance: Hitler's Pact with Stalin, 1939-1941, ably fills that gap.

When Nazi Germany and the Soviet Union signed the Nazi-Soviet Pact in 1939, the world reacted in shock and disbelief - and that included  German and Soviet citizens. Hitler had never shied away from openly bashing communism as a scourge upon the Earth, and neither had Stalin been fond of fascism. It took a great deal of propaganda to convince the citizens of each country that this was in their best interest. Few took the bait. 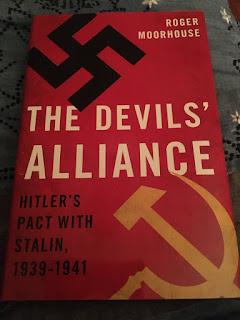 Yet this pact had far-reaching consequences that stretched well beyond the war's end. Initially, it led directly to Hitler's invasion of Poland and Stalin's invasion of Finland, but as the months went by, millions of people became caught up in these two leaders' craving for power and conquest. Thousands upon thousands of people lost their lives in the brutal actions to follow as the Baltic states were carved up, the Low Countries and France were occupied, and the horrific actions of the Einsatzgruppen spread.

During the pact, each country traded natural resources and armaments, and indeed, secrets, as well. But underneath it all, there was always unease and distrust between Stalin and Hitler about who would stab the other in the back. In the end, Hitler struck first, as indeed he had perhaps been planning all along.

As Moorhouse shows, the ramifications of this pact damaged communism worldwide and played an integral role in Eastern Europe for decades to come. In the years to follow, the official Soviet history stated that Stalin had been coerced into signing the pact and indeed, that the secret protocol contained in the pact - which dealt with the boundaries of the Baltic States and Poland, how to maintain an independent Polish state, and Germany's complete "disinterest"in Bessarabia - didn't even exist. This fairy tale continued well into the 1980s.

Moorhouse's research spans several archives, and he uses the words of those most closely involved, including German foreign minister Joachim von Ribbentrop, Soviet minister of affairs Vyacheslav Molotov, Hitler, Stalin, and more to create a compelling story that is far from boring. It's rare to find a history book written to be accessible to the professional historian and lay person alike, but Moorehouse has accomplished this feat. He tackles a rather difficult subject and all its strange nuances clearly and concisely, an absolute necessity for this particular topic. Moreover, he delves into how, exactly, the pact figured in the Cold War and eventually led to the European Parliament declaring August 23rd as the European Day of Remembrance for the Victims of Stalinism and Nazism.

In short, if you wish to truly understand how historical events shape our world and how the Nazi-Soviet Pact was not an isolated occurrence (and if you're a student of World War II, this is a must), you need look no further than this book.
Written by Melissa Amateis at 7:16 PM No comments: