I love it when I accidentally stumble upon a terrific resource. 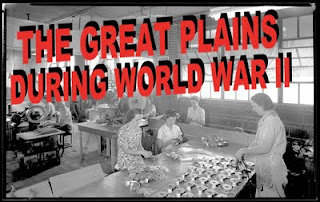 The Great Plains During World War II website is a digital archive of some terrific primary and secondary resources pertaining to the specific events that occurred in the Great Plains region during the war.
As a lifelong resident of Nebraska, this is a treasure trove for me. But it's also a fascinating glimpse into the specific challenges the Heartland of America faced. Farming is a big topic for this region, and this site has excellent resources for learning about labor shortage, the training of women farmers, and the government's need for production increase, plus much more.
What makes this a wonderful site is the inclusion of the actual period sources. For a historian like myself who doesn't have a lot of time to travel to archives, it's a God-send.

From the site:
The Great Plains during World War II explores civilian and military life in the region from Germany’s invasion of Poland in September 1939 to the surrender of Japan in August 1945. This project emphasizes life on the home front, agriculture, and military affairs. It provides access to congressional debates about isolationism, newspaper articles concerning the major issues of the day, and government documents that inform us about important public policies that affected the men, women, and children who lived in the Great Plains during the war years. The photographs, posters, and illustrations provide visual access to the past through the eyes of contemporaries while the textual information helps the reader learn more about life in the region during World War II.
Written by Melissa Amateis at 2:21 PM 1 comment:

If you want to join a community of people who share a passion for World War II, then there's no better place on the web than Our World War II History. Site owner and administrator Scott Lyons created this website as a tribute to his father, a World War II veteran, and it has truly blossomed in the last year.

Book reviews, discussions on battles, interaction with other members, and tons more features are available here.

Membership is free, and anyone can join. All that's required is an interest in World War II and a desire to honor the Greatest Generation.

There are moments in life when someone so inspires you that you cannot help but share it with the world.

This is one of those times. 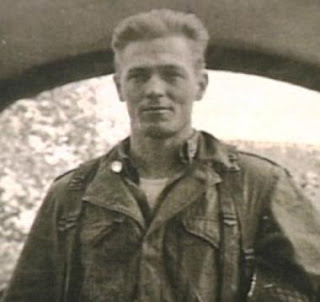 From his website:
Central Pennsylvania student Jordan Brown is a WWII buff and has embarked upon a campaign to ensure that the WWII vets who served on D-Day are memorialized. In May 2010, he learned of an effort to honor Jordan’s hero, Major Dick Winters, and all the men that served on D-Day by having a statue built in St. Marie Du-Mont, Normandy, France. (This larger effort is being undertaken by Emmy award winning filmmaker, Tim Gray, see www.TimGrayMedia.com )

When Jordan read about this effort, he decided to embark on his own campaign to make sure that the necessary monies were raised for this and an associated documentary that will be produced on Major Winters leadership abilities.
Major Dick Winters (whose heroism & leadership were captured in the Steven Spielberg/Tom Hanks mini-series Band of Brothers) is known for using the expression “Hang Tough” when leading his troops in battle and also after the war. Jordan created olive green wristbands (to match the WWII army uniforms) that are inscribed with the words “Hang Tough”. (These wristbands are similar to the Lance Armstrong “live strong” ones.)
Jordan has been distributing these wristbands for minimum donations of $1. (Jordan wanted to ensure that children could afford them too.) To date, Jordan has collected over $32,000 towards the creation of the monument. He plans to continue to “hang tough” until all the necessary monies are raised to ensure that these WWII vets are honored appropriately.
What a kid! We need more like him!
To help Jordan, visit his website at http://www.hangtough6644.org/
Written by Melissa Amateis at 9:40 AM 1 comment: