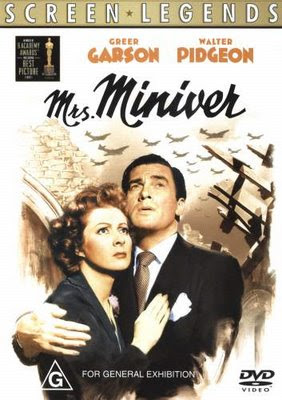 Made during the height of World War II, Mrs. Miniver is a touching yet gripping film dedicated to arousing the patriotic spirit in America and Great Britain. In this, it does not disappoint.

Kay Miniver is a kind, warm-hearted British woman who loves her family and her life in a small village not far from London, England. She and her husband, Clem (Walter Pidgeon) have three children. When war breaks out, their oldest, Vin (Richard Ney), joins the RAF and becomes a pilot while Clem has duty with the river patrol. Kay must deal with an escaped German parachutist, the marriage of her son to local girl Carol (Teresa Wright), the destruction of her home, and the loss of friends and family. Yet she continues on, encouraging others during this time, whether they be American or British, to continue fighting a just and necessary war.

If you've yet to watch Mrs. Miniver, make haste! You'll not be disappointed.
Written by Melissa Amateis at 11:51 AM 6 comments: