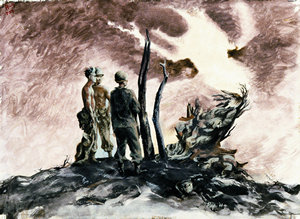 World War II combat artist Ed Reep painted this picture the morning after 17 men were killed on the beachhead at Anzio, Italy. He was very fortunate that he was not among them.

The ingenious men of the U.S. Army had dug a movie theater into the ground to avoid the shells lobbed at them by the Germans. That night, Reep decided to stay in his foxhole rather than go to Bing Crosby's Going My Way. While he was in his foxhole, a German 155mm shell landed between his foxhole and the theater. He heard screams of agony, and, already terrified, tried to pull himself together to go help. A second shell struck and he stayed put.

The next morning, haunted by the experience and wondering if he could ever paint again, he made a decision. He decided to paint right then and there.

This painting is called The Morning After. "It depicted dazed soldiers stripped to the waist and emotionless, gathering up the remnants of clothing and equipment for the fallen men and stacking it in neat piles," Reep said.

Art has the power to show us reality in all its many facets. Reep's painting shows not only the physical tragedy of war, but the emotional tragedy on the human being.

Many veterans, past and present, lived with those emotional scars. And far, far too many soldiers died a physical death. Both sacrificed. And on Memorial Day, both must be remembered.

What Have We Learned, Charlie Brown?

But what many people might not know is that Charles Schulz served in World War II as a staff sergeant. He was in Europe with the Twentieth Armored Division after D-Day and saw combat. 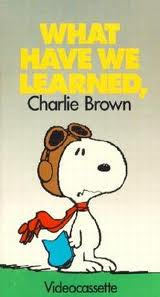 The war affected him deeply, and it appeared in his cartoon strips in various ways. But in 1983, he created a short cartoon called What Have We Learned, Charlie Brown? that was a tribute to the soldiers of World War I and World War II.

In the (too) short cartoon, Charlie Brown, Linus, Marcy, and Peppermint Patty, along with Snoopy, are in France as exchange students. While headed for the coast of Normandy, they take a wrong turn, and end up right near Omaha Beach. When Linus realizes where they are, he recalls the lessons he learned about D-Day and the Allied invasion and shares them with the other children. Real footage is blended within the cartoon to create an intriguing piece of art that manages to show the bold sacrifice and courage of that day without being frightening for the children's audience it was intended for.

As the kids explore the American cemetery, Dwight Eisenhower's voice emerges, discussing the Allies' fight for freedom against the tyranny of the Axis' powers. The next day, the kids end up in a field filled with poppies, and Linus recites the poem "In Flanders Field" by John McRae. Red poppies cover this particular cemetery that is filled with the fallen from World War I, and the words are haunting.

It is at the end of this poem that Linus turns to Charlie Brown and says, "What have we learned, Charlie Brown?"

The question is never answered, and this makes the short film all the more powerful. It is a question for children and adults, and it is one that is open-ended for a reason.

What have we learned?
Written by Melissa Amateis at 8:28 PM 6 comments: