Les Parisiennes: How the Women of Paris Lived, Loved, and Died Under Nazi Occupation

There are many books written about France, and in particular Paris, during the Nazi Occupation. But few focus specifically on the women of Paris. Anne Sebba skillfully fills that gap with her well-researched book, Les Parisiennes: How the Women of Paris Lived, Loved, and Died Under Nazi Occupation. 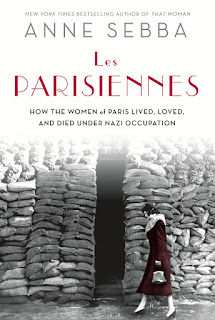 The strength of Sebba's work is that she covers a wide swath of women from every socioeconomic class, resisters and collaborators, Jews and Gentiles, rich and poor and in-between. Each has a story. Each had specific reasons for acting the way they did. Through cold winters and hot summers, some women struggled to survive while others lived high on the hog, basking in the delights of their German lovers. Everything came at a price. For those who stayed strong in their convictions and fought against the Nazi Regime, they risked being arrested, sent to a concentration camp, or being shot. After the war, those who collaborated faced derision and hatred, even expulsion from their communities.

These are their stories. And there are many of them. This is, perhaps, the harshest criticism I have of the book. There are so many names and stories that it is difficult to keep track of them. It would have perhaps been easier to select a few women from each socioeconomic category and followed them throughout the war, comparing and contrasting their experiences.

However, this criticism could also be the book's greatest strength. The sheer amount of experiences recorded by Sebba offers a very comprehensive look at the book's central topic. Bolstered by an extensive biblography, this is certainly a valuable book for those studying women under the Occupation. Thus, academics will undoubtedly find greater value in the work than some general readers, but both audiences will come away with a far greater knowledge of this crucial moment in French history.


Written by Melissa Amateis at 4:39 PM No comments: