The Man in the High Castle: Resistance Radio

If you haven't watched the alternative history drama, The Man in the High Castle, on Amazon Prime, then you are missing out on one of the best TV shows on any television platform, period. It is that good. 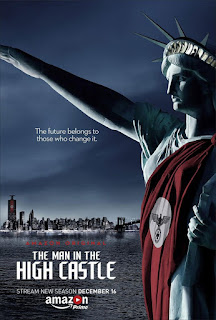 Germany and Japan have won World War II, and the United States is no more. The show starts in 1962. America has been divided into the Greater Nazi Reich from Nebraska to the east coast, and the Japanese Pacific States on the west coast. In the west, there is a strip called the neutral zone (it snakes up Montana,Wyoming, Colorado, and New Mexico), a buffer between the two empires.

The story centers on Juliana Crane (Alexa Davalos) and Joe Blake (Luke Kleintank). Juliana lives in the Japanese Pacific States while Joe Blake hails from New York City in the Greater Nazi Reich. Their paths cross in the neutral zone when Juliana promises her sister, who is in the Resistance, to deliver a film called The Grasshopper Lies Heavy to the Man in the High Castle. This film depicts an alternate history, one where the Allies won World War II. In the neutral zone, she meets Joe Blake who supposedly wants to help her, but in reality, he's working for Obergruppenfurhrer John Smith (brilliantly played by Rufus Sewell). Smith wants The Grasshopper Lies Heavy for one reason: Hitler wants it (yes, the Fuhrer is still alive and well in Berlin). There are several other story lines, including Japanese Trade Minister Tagomi, Julianna's boyfriend, Frank (who is Jewish), Chief Inspector Kido of the formidable Japanese police, the Kempeitai, and others. But they all intersect.

It is chilling to see how the world might have been if the Axis powers had won. To see Nazi policy carried out on American soil, to see Americans being subservient to their Japanese masters, to see a Nazi flag flying where the American flag should be...it's disconcerting and jarring.

Amazon has done a remarkable job in making this show. The sets, the costumes, the characters, the acting...it's brilliant. You are completely sucked into this alternative reality.

But here's something really cool.

Amazon just launched Resistance Radio, a website built as a radio that allows you to listen to DJs and radio hosts talk about the Resistance, make fun of their Nazis and Japanese masters, and work to keep the hopes alive of Americans seeking to find their freedom once again. It's pirate radio. They even have remade some of the most beloved classic songs of the period, putting a twist on them as if they were made under the boot of the Japanese and Germans.

They even sent me this amazing record player and a flyer for Resistance Radio. 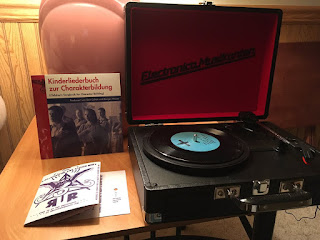 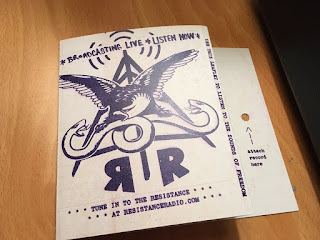 I've been listening to it all morning and if you close your eyes, you really can imagine yourself living in an America where the Nazis and the Japanese rule. It's eerie.

Check it out here: http://www.resistanceradio.com/

I could probably write a thousand word essay or more on The Man in the High Castle. It's one of those shows that encourages debate and discussion, and I've had more than one conversation with fellow fans as we analyze certain character's motivations or try to determine where the plot will go next. It's great fun.

I don't know that I've ever been this excited over a show before and have recommended it to everyone I know. There are two seasons now, so you can binge watch it (and believe me, it will be very easy to do). Amazon is making a third season, and I cannot wait.

If you haven't taken the plunge, take it now! Immerse yourself in this alternative world and muse upon "what might have been." Then thank your lucky stars that the Allies won the war!
Written by Melissa Amateis at 8:10 AM 2 comments:

The importance of recording the stories of World War II veterans cannot be overstated. Thankfully, there is a large push to do just that through several wonderful organizations and museums, incluing the National World War II Museum and The Greatest Generation Foundation. It is the latter organization that has put together this wonderful book to record the stories of 35 men who participated in the Normany invasion. The book is a result of these men's return to Normandy decades after the landings. From the back cover:

"Since 2004, the Greatest Generation Foundation has offered the opportunity for veterans to return to their battlfields at no cost to them. These voyages back to the battlefields are often emotional, providing aging veterans a long-overdue method of dealing with their war experiences, a chance to re-kindle pride in their service and sacrifices, and a venue to education others."

What an incredible, honorable mission.

Return to D-Day: 35 Men, 70 Landings at Normandy by The Greatest Generation Foundation and Warriors Pubishing Group profiles 35 men who were part of one of the most important military actions in history. Each story is accompanied by two photos: a current phone and one from when the veteran was in service. The book is divided into sections and concentrates on each force involved in the Normandy invasion: ground forces, paratroopers, naval support, air support, pathfinders, and those at Eisenhower's headquarters. The men's individual stories paint a harrowing picture of just how all-encompassing the Normandy Invasion was. 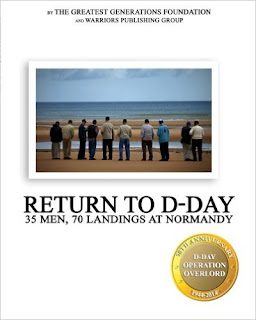 It's a moving, sobering look at how the past has shaped these men, proving once and for all that a warrior's spirit never dies.


Written by Melissa Amateis at 11:13 AM No comments: