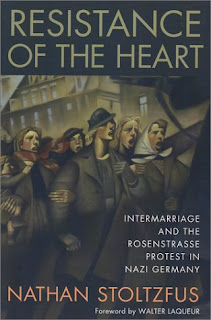 Intermarriage between Jews and non-Jews during the Third Reich represented a powerful protest. Those who chose to remain married, despite the overwhelming pressure to divorce, showed strength and courage. Nathan Stoltzfus's book, Resistance of the Heart: Intermarriage and the Rosenstrasse Protest in Nazi Germany reveals the stories of those who lived in such relationships during the Third Reich and survived the war due to their tenacity.

Scholarship on these "in between" German Jews is relatively scarce and thus, this book fills an important void. Stoltzfus devotes much of his text to the years preceding the Rosenstrasse protest, introducing three main couples. Through their interviews, Stoltzfus weaves a tale of courage and individual non-compliance toward the restrictive racial laws of the Third Reich. By focusing largely on the women's perspective, Stoltzfus enlightens us to the world in which they lived and to the sacrifices they made in order to stay married to their Jewish husbands. Indeed, Stolzfus's argument views the protest as a "climactic event in the lives of those who protested and also as part of the complex of events and circumstances that surrounded the climax of World War II" (p. xxv). Stoltzfus remains focused throughout the book, rarely deviating from his thesis.

Beginning with Hitler's rise to power, Resistance of the Heart chronologically traces the steps taken against the intermarried Jews of Germany. Joseph Goebbels, Hitler's minister of propaganda, played a leading role in the campaign toward the Final Solution. Goebbels frequently wrestled over the problem of intermarried Jews. Ultimately, however, the solution depended largely upon the popularity of the Regime and the public's cooperation.

As Stoltzfus argues, "The fundamental Nazi ideology and in turn the prized Nazi policies cut against the grain of social traditions the Germans could not part with" (p. 15). Marriage remained one of the binding ties of German society. Intermarried couples directly conflicted with Nazi ideology since racial purity was a main component of Nazism. However, Hitler's popularity curbed the majority of people's dissent until 1944-45. But intermarried couples protested by staying married.

The lives of the couples - Charlotte and Julius Israel, Elsa and Rudi Holzer, and Wally and Gunter Grodka, comprise much of the story. All three men were Jewish, except for Rudi Holzer, who was a Mischling. Stoltzfus tells the couples' courtship stories and immediately draws you into the everyday lives of ordinary Germans. From the Israel's living room where music and song kept Nazi terrors at bay for a short while to the intense pressure of the Grodka's denouncement-hungry neighbors, to Elsa Holzer's smuggling of a love note to her husband during the Rosenstrasse protest, Stoltzfus brilliantly reveals the daily problems they faced.

The "waffling" of the party leadership on the racial laws is explained through the turbulent life of Werner Goldberg, a Mischling who went thorugh several transitions during his life in the Reich. As the Nazis tried to "work out the conflicts between its racial ideology and practical policies", (p. 85), people lived in a constant state of transition. Rudi Holzer, for example, lived the life of an "Aryan" and remained relatively untouched as a Mischling until new laws came into effect.

Stoltzfus also delves into Goebbel's diary to reveal key points in the administration of actions against the Jews. As the war drug on, Goebbels continued to search for ways to expel the intermarried Jews from Germany. Yet popular opinion always held a significant role in the decision-making process. Women's opinions were especially crucial since their dissent during World War I helped cause the breakdown of morale.

Indeed, women held great importance in a variety of ways. They constituted an important labor force and their letters to husbands and sons at the front could affect morale. Goebbels even recorded in his diary that "women were 'largely responsible' for 'our [public] sentiments'" (p. 197). In early 1943, the labor conscription of women for the Total War decree failed completely as large numbers of women refused to work. As Stoltzfus points out, "...it was not only because of their gender that a mass of women might succeed in a limited public protest but because they were civilians who threatened home front morale" (p. 201). Thus, the stage was set for the Rosenstrasse Protest.

When the Final Roundup of Berlin Jews, including those in intermarriages, began in late February of 1943, Goebbels thought to rid himself of these "privileged" Jews. But as the tale of Rosenstrasse unfolds, he was wrong. The Jews were taken to a facility located in Rosenstrasse, a street at the center of Berlin. Non-Jewish spouses of the prisoners started to gather outside and demand the release of their loved ones. The individual stories of the women, including Charlotte Israel, Elsa Holzer, and Wally Grodka, reveal the resilience of these wives to rescue their Jewish husbands and children. Even though the Gestapo threatened to shoot time and time again, the women remained. As Elsa Holzer remarked, "We acted from the heart, and look what happened...What one is capable of doing when there is danger can never be repeated" (p. 239).

Goebbels and Hitler eventually ordered the release of the intermarried prisoners in order to dissolve the protest. Remarkably, all the Jews released from Rosenstrasse survived the war. But Stoltzfus questions whether or not the proest can be termed resistance or dissent.

With smooth prose and contemporary photos, Stoltzfus delivers a heartening, yet chilling tale. However, the historical accuracy of his sources may come into question since the interviews were held so many years after the war and time has a way of dimming one's memory. But perhaps Stoltzfus's most compelling question throughout the text is a tantalizing "what if?" Would more protests in Nazi Germany have halted the completion of the Final Solution? It is sobering to contemplate.
Written by Melissa Amateis at 6:05 AM 12 comments: 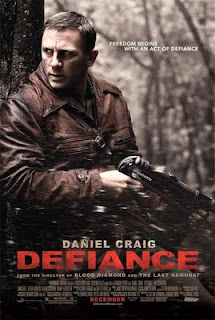 True stories make some of the best films. That is certainly the case with Defiance.

Daniel Craig (Tuvia), Liev Schreiber (Zusia), and Jamie Bell (Asael) star as the three Jewish Bielski brothers of Belorussia who, after the slaughter of their family in 1941, take refuge in the lush forest near their home and begin an excruciating fight to stay alive.

It's not long before more hunted Jews join them. Staying alive remains their top priority for awhile and foraging for food and shelter becomes paramount. But as the news of more atrocities spread and as more Jews are slaughtered, the Bielski brothers vow to do more against the tyranny of Nazism. Along with others in the camp, they form a resistance group known as the Bielski Otriad.

The group build their own community in the forest and here, there is no room for dissent. Food must be shared equally, and everyone must do their part - even the intellectuals who previously had never picked up a hammer in their lives or fired a gun are expected to learn.

Through deadly winters and the threat of constant discovery, Tuvia has no choice but to rule with an iron fist, even when his brother, Zusia, decides to join the Russian partisans in striking against the Germans.

The theme running through this movie is the importance of family. The bond between the three brothers is stronger than iron, and even though they have their disagreements, their love for one another is deep. This bond winds through the camp itself as the people realize that they, too, are a family, a community, and must work together to survive. It's an incredible testament to the determination of a people to fight back against overwhelming odds, especially at a time when Jews were seen as victims with no will to fight back. Defiance sheds light on those instances where Jews refused to succumb to their fate.

Yet there is another aspect to Defiance that bears further pondering. While watching the DVD extras, which included interviews with the writers and director of the film, this question was asked: Must you become a monster to defeat a monster? The Bielski brothers were ruthless and there are several scenes in the movie which portray this. Tuvia executes those responsible for his family's death - a father and his two sons - in cold blood. Zusia goes out and kills Germans in revenge for the death of his wife and child. When a German soldier is captured and brought back to the camp, the movie portrays a chilling scene of the Jews beating the soldier to death as they let their overwhelming grief and anger at all of those lost at German hands overtake them.

It's a question worth pondering.

Overall, Defiance is an incredible movie, aptly titled, with solid performances by every cast member. It's also an amazing story of beating the odds. The Bielski's saved more than 1,000 Jews and today, those Jews' descendents number in the thousands.

To find out more about the Bielski brothers, visit the Holocaust Research Project or http://www.courageandcompassionexhibit.com/.
Written by Melissa Amateis at 7:31 AM 3 comments: