In early 1942, America was incredibly unprepared for the war. We needed to build tanks, airplanes, trucks, guns, and other war materials. President Roosevelt called for the production of these war materials and the goals were ambitious - so ambitious, in fact, that meeting the quota bordered on the impossible. Metal was in short supply and thus, the government decided to launch a campaign to encourage Americans to turn in their junk scrap metal.

Unfortunately, their campaign was a complete failure, and the scrap shortage bordered on the critical. Henry Doorly, the publisher of the Omaha World Herald, decided to do something about it. And that's what Scrappers: How the Heartland Won World War II is about.

Doorly and his staff organized a scrap drive for the state of Nebraska. Each county would compete against each other, per capita, for three weeks to see which county could gather the most scrap metal. Prizes would be awarded at the end of the three weeks. Doorly went on the radio to announce the drive and information appeared in local and regional newspapers. 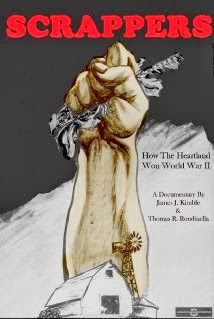 The response was overwhelming. In those three weeks, Nebraskans filled their town scrap heaps with thousands of pounds of scrap metal. Children went door to door to collect scrap. Farmers turned in old farm machinery. Even the Omaha World Herald found several old printing presses to donate to the cause.

By the end of the three week period, Nebraskans had contributed 67,000 tons of scrap. The success of the drive was noticed by others around the country, including the president. Doorly wrote a manual for how to conduct scrap drives called the Nebraska Plan and distributed it to newspaper publishers around the country. This led to a nation-wide scrap drive.

The documentary features numerous Nebraska residents - even Johnny Carson - who participated in the scrap drives. Their sense of pride and patriotism for contributing to the war effort is obvious, and indeed, their efforts made it possible for war production to stay on track and even surpass their quotas.

What is interesting, however, is how the documentary juxtaposes the World War II homefront to the homefront of today following the attacks on September 11, 2001 and the subsequent wars in Afghanistan and Iraq. The filmmakers ask an important question: would American citizens today respond in the same way if the government asked them to sacrifice for the nation? Would citizens do without?

In the film, historians and Nebraska scrap participants alike unanimously say that no, American citizens do not have the same type of unity that we experienced during World War II. And that's rather sad.

It did not surprise me to hear this point of view and I do, in fact, agree with it. As some historians pointed out in this documentary, many Nebraskans didn't like President Roosevelt, but it didn't matter when it came to supporting the war effort. They did what had to be done regardless of politics. Can we say the same today?

Scrappers is a terrific documentary, one that shows how, when people choose to come together for a common goal, they truly can make a difference.
Written by Melissa Amateis at 8:12 PM No comments: