Priscilla: The Hidden Life of an Englishwoman in Wartime France

Many of the stories that come out of Wartime France are about those who risked everything to fight the Germans. Brave men and women fought in the Resistance or hid Jews or did whatever small act of civil disobedience they could to take a stand against the Nazis.

This is not one of those stories.

Instead, this is a story of survival, of guilt, of shame, and of collaboration.

When author Nicholas Shakespeare was young, he used to go with his parents to his aunt and uncle's house in rural England. His Aunt Priscilla always mystified and fascinated him at the same time. Who was this woman, really? He didn't find out until after she'd passed on and he was gifted with a treasure trove of her wartime letters, journals, and photographs.

Priscilla had been a British citizen living in France during the Occupation. But her documents revealed a very different person than what he'd previously thought.

In what must have been an exhausting search, he went to archives, followed leads, tried (and sometimes found) people who knew her. More and more of the puzzle began to fill in, but it was creating an astonishing picture. In short, if Priscilla had not returned back to England in 1944, after the liberation of France, she would have had her head shaved and been paraded around the town as a German collaborator. 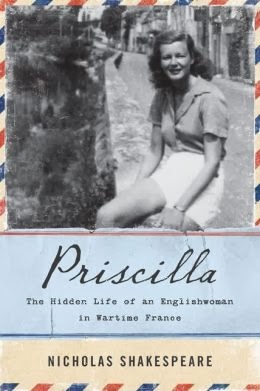 It may be easy to immediately dismiss Priscilla after reading such a damning conviction. But that is one thing you simply cannot do when reading Shakespeare's remarkable book. For Priscilla: The Hidden Life of an Englishwoman Living in Wartime France shows just how blurred the lines of survival and collaboration were during this time of upheaval, especially for women.

Priscilla's unconventional upbringing brought her to France at a young age to live with her mother, leaving her father, a noted BBC broadcaster, behind in England. Those formative years in France, especially exposed to the loose morality of her mother, left a mark on Priscilla. When Priscilla got pregnant out of wedlock and had an abortion, she chose marriage to a French aristocrat old enough to be her father to save her. It didn't. Priscilla wanted to be loved in all the ways a woman can be loved - but her husband couldn't provide it for her.

When the Germans came to France, Priscilla became part of a world where the line between friend and enemy was frazzled. At first, she tried to keep her head down, stay out of sight. But then she was put into Besancon, a concentration camp for British subjects where she suffered unspeakable conditions. After her release (who pulled the strings to release her?), she had affairs with numerous men, and some of them turned out to be connected to the highest members of the Nazi party. Was it a matter of survival that she became involved with these men, poor judgment, or a need to be loved? Was she blind to their activities? The record suggests not. Why, then, did she stay with them? It's a complicated question and one that has a multitude of answers.

What Shakespeare does, and does very well, is to ask a question about France itself. When the war was over, of course everyone was a patriot in France - just as everyone had been against Hitler and against the Nazi party in Germany. But this simply wasn't true. Priscilla symbolizes France in her bid to survive the war, and her own questionable, some would say unforgivable, decisions mirror those made by the French government and other French collaborators.

Written using a novelist's style with intimate details of life in Occupied France (and it is done very well considering Shakespeare is a noted novelist), Priscilla is a gripping read. Yet it challenges our notion of good and evil and more than anything makes us ask ourselves the question, "What would I have done?"

The answer may surprise you.
Written by Melissa Amateis at 2:15 PM 4 comments:

Churchill and the King by Kenneth Weisbrode

Winston Churchill is a larger than life figure. He's become synonymous with Britain's victory in World War II, and is one of the most stubborn, controversial and downright fascinating characters in British history. There are museums devoted to him. His ancestral home, Blenheim Palace, is even open to the public. (It's a beautiful place to visit - I recommend it). His visage is found on a plethora of tourist baubles. And the stack of books written about him only continues to grow.

What more can we add to the narrative of his life? Hasn't he been poked and prodded enough by historians? Is there really any new ground to uncover? 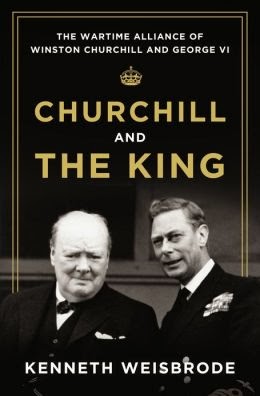 Perhaps so. Kenneth Weisbrode's Churchill and the King: The Wartime Alliance of Winston Churchill and George VI is certainly a worthy addition to the Churchill historiography. The slim volume comes in at only 184 pages and is written in a conversational tone sadly lacking in more academic historical works. But perhaps that is because this book is not meant to be a rigorous academic study, but a personal and intimate look at a friendship between a prime minister and his monarch, one that became pivotal to winning the war.

Is this a bold claim to make? Undoubtedly. Yet in reading through Weisbrode's work, one can't help but at least consider such a conclusion. He uses a plethora of letters from both the King and Churchill, anecdotes from government aides, and previous scholarship on both men to present a portrait that is remarkably well-balanced. Neither Churchill or the King are made out to be saints or sinners, but quite human.

The two met almost every week during the war (always on Tuesdays, though locations would change due to Luftwaffe bombing raids) and frequently consulted each other on various issues as they valued each other's opinion. In fact, Weisbrode posits that "Churchill extended to the king the reassurance that he needed in order to reassure the British people" (70). By the same token, Churchill's devotion to the monarchy was well-noted and in this king, well-placed. In short, theirs was almost a symbiotic relationship.

The one glaring flaw of this work - which is really not the author's fault - is that we know more about Churchill's activities and thoughts than we do the King's. The answer to to this is simple: there are more archival documents on Churchill for this period of time than there is for the King. Still, Weisbrode makes good use of what he has and the result is an entertaining and indeed, intriguing look at this asymmetrical relationship.

Note: Book was received for review purposes only and I received no monetary remuneration for this review.


Written by Melissa Amateis at 1:53 PM No comments: