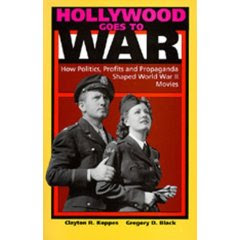 World War II movies from the Golden Era of Hollywood are plentiful. Most of the era's biggest stars made a war picture. Others went on war bond tours, worked at the Hollywood Canteen, or even served in the armed forces.

Hollywood Goes to War: How Politics, Profits, and Propaganda Shaped World War II Movies, takes an in-depth look at Tinsel Town during the war years. It also takes a closerc look at the OWI - the Office of War Information bureau. This group had one important question for movies made during the war - Will this picture help us win the war?

This is a fascinating look at the relationship between the movie industry and the American government, and offers fantastic behind-the-scenes looks at several popular movies of the time.
Written by Melissa Amateis at 2:09 PM 3 comments: