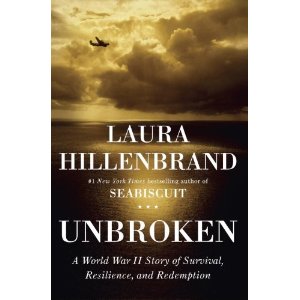 If you don't know who Louie Zamperini is, you need to.

He's the subject of Seabiscuit author Laura Hillenbrand's latest book, Unbroken: A World War II Story of Survival, Resilience, and Redemption. It's currently on the New York Times Bestseller list and deservedly so. Hillenbrand's writing is brilliant - all the more so because she suffers intensely from Chronic Fatigue Syndrome - and once she sucks you into Zamperini's world, it's very difficult to let go.

Zamperini was a tough kid growing up. He liked to steal and get into mischief. But when his parents were at their wit's end with him, he decided to tunnel his energy into something more productive: running. He became a national sensation and earned himself a trip to the 1936 Olympics where none other than Adolf Hitler congratulated him on his race.

When war came, Louie joined the air corps and became a bombadier on a B-24 stationed at Oahu. While out on a search mission to find other downed airmen one day, the plane engines failed and the B-24 plummeted into the Pacific Ocean. Only three men survived.  The three were lost at sea for 47 days. One of the men died. But Louie and his other companion, Allen Phillips, kept on drifting until they finally reached land - only to be captured by the Japanese.

Interred at several POW camps over the next two years, Louie barely survived - especially when a particularly brutal and sadistic Japanese sergeant nicknamed "The Bird" targeted him for daily beatings and humiliations. Starving, sick, and a mere shell of the man he used to be, Louie refused to give up. When the war ended, he was still standing - and he's still standing today at the age of 93.

But he had his demons. When he returned from war, he sank into alcoholism and started suffering terrible flashbacks. His nightmares consisted of The Bird beating him. He only wanted one thing: to travel to Japan and kill his previous tormentor. But then God stepped in - and Louie's demons stepped out. At a Billy Graham revival in California, Louie gave his life to God and started a new life - one that would include forgiveness of his enemies...including The Bird.

What is remarkable about Hillenbrand's story is the extraordinary detail of Louie's life while at sea and in the POW camps. It's a story that literally reads like a novel, and is definitely not a "scholarly" history. No...this is a human story, and the very best kind. Louie's incredible resilience, courage, and strength is the stuff of legend.
Written by Melissa Amateis at 10:48 AM 8 comments: