"I remember the young soldier well, he screamed, he was just out of control, and he screamed, and there was another soldier next to him who consoled him, and embraced him. That was a moving moment for me, to see that compassion in combat. And these are the things a person feels when he's in proximity to death-- his buddy, that next human being, that person in the foxhole is the most important person in your life. "


Howard Brodie sketched this picture in the midst of combat during World War II. He was a combat artist, trying to portray war as it really was - not the sanitized version, not the version Hollywood most often wanted you to see. He, and other combat artists, showed war in all its gruesome reality. We need to see the true face of war. It is not glamorous. It is a sacrifice of the body, mind, and soul.

Remember them. Always.
Written by Melissa Amateis at 7:30 PM 2 comments: 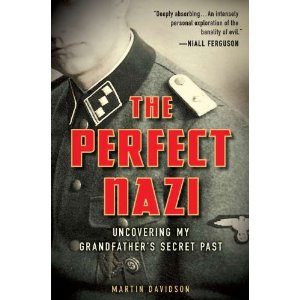 Throughout his childhood, Martin Davidson always wondered just who his German grandfather, Bruno Langbehn, really was. His cryptic, sometimes boastful conversations hinted at something darker underneath the relatively calm exterior he portrayed to the world. While Martin knew his grandfather had been in World War II on Germany's side, he never knew exactly what Bruno's role was.

As an adult and successful BBC producer, Martin decided to find out. But what he discovered shattered any type of illusion that his grandfather was just a German pulled by fate into the war.

Bruno Langbehn was a product of the tumultuous years following Germany's defeat in the Great War that produced a generation of hyper-ideological young men and women who vowed to never again be subjected to the humiliation caused by the Versailles Treaty. To them, the great German nation - the Volk - had suffered their fate because of a worldwide Jewish conspiracy, and had been forced to a subservient level that denigrated their country.

Langbehn's father had fought in the Great War, and as a teenager and young adult, Bruno began to identify with National Socialism, joining the very first groups in Germany. He adhered strictly to the party line, believed every contemptible syllable uttered from Hitler's mouth, and participated in the rousing street fights popular in Germany during the political upheaval of the 1920s. His dedication and devotion to National Socialism didn't go unnoticed, and he kept advancing in the chain of command.

In short, Langbehn wasn't forced into this role and didn't enter it reluctantly - he craved it.

Davidson's meticulous research reveals his grandfather's life in Germany, from those first days where idealism was all the Nazi party had, to Bruno's application to join the SS once Hitler took power, to Bruno's role in the war, and his escape from justice after Germany's defeat.

It is a dark, harrowing story, made all the more chilling for Davidson - and indeed, for us all - because his grandfather, the man who'd taken him fishing and snuck him booze at a young age, was one of those Germans. What's worse, Bruno had no remorse for his role in the Nazi regime, but stubborn, irretractable pride. It was a pride that destroyed his first marriage and destroyed his relationship with his daughters.

Davidson's prose is unsparing and unapologetic as he tries to come to grips with the truth. It's sometimes painful to read Davidson's struggle to understand how his grandfather became such a chilling monster. This is especially true when so many Germans from this period did not wear their Nazi sympathies like a badge of honor as did Bruno during the months and year following the war.

In short, Bruno Langbehn was the perfect German and even more, The Perfect Nazi.

If this book hammers home one point, it is this: that even an ordinary individual, a man who chose the career of dentistry in the midst of all his ideological upheaval (and then spent his time off literally terrorizing people), can change the fate of nations. It was thousands of ordinary men and women, like Bruno, who made Nazi Germany possible.

And that is a sobering thought, indeed.
Written by Melissa Amateis at 11:36 AM 5 comments:

The U.S. government knew there would be lots of challenges to face for our military boys during and after the war. That's why, as early as 1943, the Army’s Division of Information and Education produced a series of pamphlets to help guide them.

The American Historical Association (of which I am a proud member!) has quite a few of these pamphlets in their online exhibit, Constructing a Post-War World: The G.I. Roundtable Series in Context. Since the Association itself was involved in the G.I. Roundtable Series, it offers a fascinating look at not only the preparation for a post-war world, but how the historical narrative was shaped by a leading historical organization.

For example, there are no pamphlets that discuss the new women's role in the work place. Instead, it was just assumed that they would return to their homes with nary a protest. African-Americans emerging role also wasn't discussed.

However, as the background documents will attest, an important part of the way the topics were selected and the pamphlets were ultimately written was through the manipulation of historians’ ideals of objectivity. Not surprisingly, the “objective” norms the military advisors pressed on the authors of the series reflected their white upper-middle-class frame of reference. As we note in the larger analysis, the AHA tailored its pamphlets to paint an idealized image of a postwar world that was essentially free of minorities, where women happily moved out of the factories and back into the kitchen, and where America would largely dominate the world stage

Check out the pamphlets themselves as well as a detailed analysis of the program. Well worth a look!
Written by Melissa Amateis at 11:23 AM 4 comments: