Post traumatic stress disorder was not given a name until sometime in the 1980s. But that didn't mean veterans returning from wars were not subject to psychological trauma.

Even in the 1940s, this trauma was recognized, but kept hush-hush. Renowned film director, John Huston, made a documentary on this subject in 1946. However, the U.S. Army blocked its release, and it was not revealed to the public until 1980. By that time, however, the quality of the film itself was in such bad shape that watching it was impossible.

Thanks to the National Archives, the film was fully restored and can be watched for a limited time at this link.

This is a no-holds barred look at the psychological trauma suffered by World War II veterans, and further shows how we need to remember what these brave men and women went through. That the U.S. Army banned its release for so many years, however, is not only telling, but shameful.
Written by Melissa Amateis at 9:34 AM 1 comment:

The Harvard University History Department and Extension School has now made it easier for you to learn about World War II without having to pay a dime.

Free video lectures (or audio - your preference) are now available through their website. Taught by Charles S. Maier, PhD, Leverett Saltonstall Professor of History, Harvard University, this course begins with the end of World War I and goes all the way through to the origins of the Cold War.

Here is the full link:

Enjoy!
Written by Melissa Amateis at 11:13 AM 2 comments:

The Sentinels: Fortunes of War

Gordon Zuckerman's first book in his Sentinels trilogy, Fortunes of War, starts off a unique series that focuses on the Six Sentinels, six graduates - men and women - of an elite California economic doctoral program in the 1930s who uncover a plot by German industrialists to finance the Third Reich by squirreling away hundreds of millions in illegal war profits. 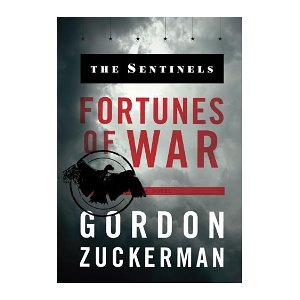 It's an intriguing premise, to be sure, but it starts off a little slow. The pace picks up somewhat and Zuckerman delivers on the promised action and suspense. The six main characters - the sentinels - each have excellent connections both financially and through their families, making it possible for them to infiltrate the upper echelons of European society. Danger dogs their every step, however, as they try to stop the outbreak of World War II.


Zuckerman knows his stuff, and well he should considering he is a graduate of Harvard Business School. He's also studied banking, international finance, and history, making him the perfect candidate to tell this story. It's definitely a different story than the typical World War II fare and should find a ready audience.


Written by Melissa Amateis at 7:04 PM No comments: