Soldier From the War Returning

It's rare for me to pick up a book and read it in one day. Rarer still that it is a nonfiction book. Yet University of Pennsylvania history professor Thomas Childers' Soldier from the War Returning: The Greatest Generation's Troubled Homecoming from World War II is one of those priceless gems.

It is, in a word, brilliant. Not only does it delve into a topic largely neglected not only by historians, but also by the general public, but it also exposes the dark underbelly of war's emotional impact. 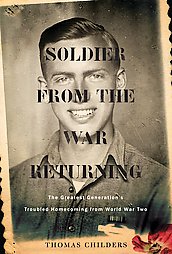 Childers profiles three different World War II veterans: Michael Gold, Willis Allen, and Tom Childers (his father). All three had radically different experiences during the war. Gold was shot down in a B-17 and captured, held as a German prisoner of war until Germany collapsed. Allen was part of the landings at Sicily and lost both his legs to a German shell. Childers was stationed in England as support personnel for an air base. Yet all three came back with emotional wounds deeper than any trench.

Based on interviews, oral histories, government documents, and diaries, Childers weaves a complex, heartbreaking tale of these three men and their families, and how the war infiltrated every part of their lives despite their attempts to hold it at bay. They were not the only ones. Thousands of returning vets faced the same problems - unemployment, divorce, emotional instability, nightmares, physical handicaps. The wounds ran deep into their psyche, leaping out like a demon when least expected, causing havoc and pain to themselves and those around them. Familiar phrases like, "He's changed since he got back from the war" or "He never was the same since the war" became common.

But it wasn't just the soldiers who suffered. Families, friends, spouses, and children endured the war's heavy toll. Broken homes and broken families were not uncommon. Even though society had tried to ease the blow of returning vets by creating articles and pamphlets about how "your husband will need time to adjust" and "it may take years for him to truly recover", they couldn't possibly know how their advice merely skimmed the surface.

Yet this is an aspect of World War II that we don't often think about. We tend to look at the Greatest Generation through a lens of nostalgia, one that shows us how rosy everything was when they came back home, picked up where they left off, and went on to live their lives just fine, thank you very much.

And for some veterans, it was like that. Adjusting to civilian life wasn't terribly difficult. But they were the lucky ones.

Every serious student of World War II history needs to read Childers' book. It is a necessary study, one that reads more like a novel than a history book, and one that tells the emotional cost of war in all its chilling detail.
Written by Melissa Amateis at 10:56 AM 11 comments: