When this German miniseries on World War II came out in Germany in 2013, I was quite anxious to watch it. I knew it had generated some controversy, but I also knew I had to judge for myself. It just recently appeared on Netflix streaming, and I binge-watched all three episodes.

Generation War (Unsere Mütter, Unsere Väter) centers on five friends from Berlin who've been together since childhood: Wilhelm and his younger brother, Friedhelm, are in the Wehrmacht; Charlotte (Charly) just joined the German Red Cross as a nurse; Greta is a bartender with singing aspirations; and Viktor is a Jewish tailor.

The series follows the five friends from the summer of 1941 through the end of the war and shows how their lives intersect and dramatically change as the war drags on. 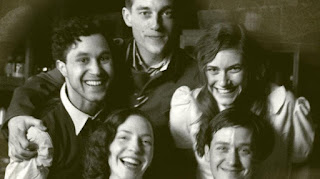 Both brothers serve on the Eastern Front, beginning with Russia. Friedhelm knows the futility of the war from the start and hangs on to his humanity until the war mercilessly grinds it out of him. Wilhelm, a lieutenant, does his duty even when he doesn't want to, but the senselessness of leading his men to slaughter becomes too much for him. Charly works at a field hospital and sees the war's gruesome toll on a daily basis. Greta, wanting to save her boyfriend, Viktor, begins an affair with a  Gestapo officer, one that will lead to her eventual destruction. And Viktor, after being held in a concentration camp, escapes from a train en route to Auschwitz and ends up embroiled with Polish partisans.

Not all of them survive, and those that do have changed so irrevocably by the war's end that they are a mere shadow of their former selves.

The acting is quite brilliant. I feel that the actors who played the two brothers (Volker Bruch and Tom Schilling) did an especially incredible job of portraying the relentless toll of war and how it fundamentally alters our perceptions of good and evil, moral and immoral. 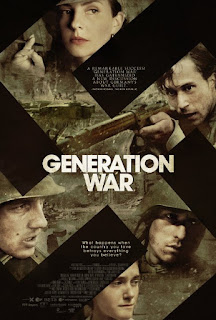 Some of the reviews I read said it "whitewashed" Nazis crimes and made the central characters sympathetic. Two points to consider here. One, I don't believe it whitewashed Nazi crimes at all - there are several scenes that show just how horrific they really were and also shows the Wehrmacht's complicity in such crimes. Two, the fact that the central characters were sympathetic (and at times, they most certainly were not) is what a story needs to keep the audience intrigued. Not many people want to watch a movie with characters who are so despicable that you just want to throw the remote at the t.v. in disgust or turn it off altogether.

I also think there is a tendency for people to believe that any type of World War II movie that comes out of Germany cannot have main characters who are not fanatical Nazi ideologues because it's not "accurate." I dispute this notion. I don't believe that 100% of Germans were fanatics or subscribed to Hitler's ideology.  That is a statistical improbability, and we have historical evidence that proves otherwise. However, that the vast majority went along with the war is indisputable.

There were plenty of other characters who showed the hatred, racism, intolerance, and sadistic behavior of average Germans and soldiers alike. So all in all, I felt we were given all sides of the story.

A very strong point of the series: it shows how the constant brutality of war dehumanizes a soldier, no matter what side they're on. E.B. Sledge talks about this a lot in his memoir, With the Old Breed. He served in the Marines on Peleliu and Okinawa, two of the most brutal battles fought in the Pacific campaign. He started out with his humanity in full force and cringed at the inhumanity he saw his fellow soldiers participating in. For example, Marines would often take souvenirs from dead Japanese soldiers. But after awhile, Sledge found himself doing the same thing. 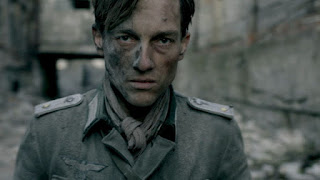 By the same token, the two brothers serving in the Wehrmact smack right up against this brutality. Freidhalm begins the war with a high sense of morality, appalled at what he sees going on around him, and determines not to participate in it. Yet two years later, after experiencing the horror of the Eastern front, he's turned into a hardened soldier, capable of killing on command.

Of course, this isn't limited to soldiers. Charly must cope day after day with wounded, dying soldiers to the point where, toward the end, she actually hinders some soldiers' healing process so they don't have to go back to the front.

I do have some quibbles. I was astonished at how they portrayed the Polish partisans as being so virulently anti-Semitic. Further research shows that this wasn't quite true, and I'm wondering at the filmmakers' decision on this.

What the series succeeds in, quite admirably, is to show how immensely war changes people. The carefree, happy group of friends from the first few scenes is a faraway dream. Those who survived and meet again after the war are a shell of their former selves, irrevocably different, and they will never view each other quite the same way again.

It's always interesting to see how other countries portray the war, and this experience was no different. I believe the filmmakers did an admirable job of portraying all sides of the German experience, and in this, they succeeded in achieving their goal: of starting a conversation about the war in contemporary Germany. With the generation who experienced this war fast disappearing, it's imperative that conversation continues.

For American audiences, this is a must see. It examines the war from a different perspective than the narrative we currently have, and deepens our understanding of not only how the war affected the common soldier, but how the Nazi ideology infected every segment of German society. This is its strength. While there were those who became profoundly disillusioned with Hitler's rhetoric, others believed in it up until the very end.

The series is currently on Netflix streaming.