Terror Before Dawn: A Child at War

Anne Raghnild Fagerberg was just a child when the Germans invaded Norway in 1940. Yet she never forgot those years of terror and oppression, and she documented them in a handwritten manuscript that her son later turned into the memoir, Terror Before Dawn: A Child at War. 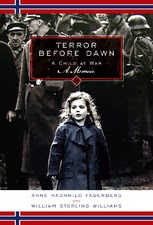 Born into a family of privilege, Anne enjoyed life at her family's villa in a suburb of Oslo. Yet their peace was quickly shattered when the Nazis invaded. Life under German occupation was strange and terrifying for young Anne. She vividly recalls the times she and her mother would go to Oslo and see the German soldiers all around. Gestapo visits to houses in their neighborhood became routine. Food became scarce. And the German persecution of Jews became evident.

Anne's father, Karl Ragnar Fagerberg, was the vice president of a large electric company in Oslo. But he was fiercely loyal to Norway and he became involved in the underground and resistance movements. Even though she was only seven years old, Anne began to help, too, smuggling illegal papers to specific contacts in the Resistance.

As the war carried on and the family put up with bombings, ever-dwindling food rations, and increased Nazi persecution, Anne became mature beyond her years, developing an intense hatred of the Germans and everything they stood for. Her father was taken by the Gestapo, but thankfully released, though he'd been severely beaten. Her sister was raped by two German soldiers and was never again the same, eventually having to be admitted to a mental institution.

The family continued to fight, increasing their underground and resistance activities until finally, the Germans were ousted from Norway and freedom came to the country once more. When Winston Churchill later visited, he shook Anne's father's hand and thanked him for his part in the victory over the Nazis.

Terror Before Dawn is a gripping memoir, and a quick-paced read. It offers an intimate look at Occupied Norway and contains remarkable details about everyday life. At its heart, it shows the incredible lengths one family -- and one young girl -- took to reclaim their homeland.
Written by Melissa Amateis at 11:33 AM No comments: