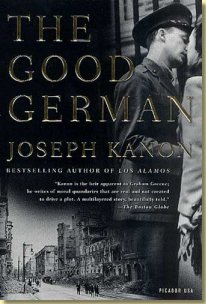 When is it justice and when it is vengeance? Joseph Kanon tackles this moral question in his stunning novel, The Good German.

Set in postwar Berlin, Jake Geismar is a newspaper reporter who returns to Berlin to cover the Potsdam Conference and to find the German woman he left behind. But while he searches for her, he stumbles upon the dead body of an American soldier that just happens to surface during the Potsdam Conference. Geismar smells a rat and begins making enquiries, eventually leading him to a traitorous mix of Russians, Americans, and Germans.

Kanon briliantly examines the question of justice in this book - from those who committed war crimes and to those who stood by and did nothing. Are they just as guilty? And how much should a people be punished before it turns into nothing more than cold-blooded revenge? Kanon leave the answer up to you.

A fast-paced read and brimming with details of post-war Berlin, The Good German is a must for any World War II enthusiast.
Written by Melissa Amateis at 3:42 PM No comments: 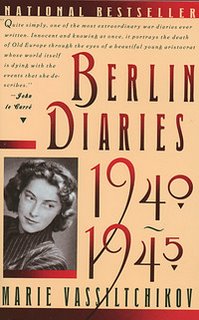 I'm only a quarter into reading this book, but already it's captured my attention. Marie Vassiltchikov was a White Russian princess living in Germany during World War II. Most notably, she worked in the German Foreign Office from 1940 to 1944.

Her diary entries are informal, yet able to capture a moment in time that the war destroyed forever. From the endless rounds of parties to bombing raids and late nights at work, Marie or "Missie" as she was more well known, shares a little-known part of German history. We come to know her family, her friends, and her co-workers. A keen observer, Missie documented much of what went on around her in the context of what was happening in the war. This gives us a perceptive and startling glimpse into the everyday lives of those living in Berlin. As the war stretches through the years, so, too, do Missie's diary entries become lengthier, as if trying to fully understand the devastation of Hitler's mad ambition.

Highly readable and entertaining, Berlin Diaires: 1940-1945 will be a welcome addition to any World War II collection.
Written by Melissa Amateis at 8:19 PM No comments: