The Liberation of Europe: The Photographers Who Captured History from D-Day to Berlin

There are undoubtedly millions of photographs of World War II. A great deal of them have been published and are now familiar to us. Think of Robert Capa's harrowing photos of Omaha Beach or the Times Square kiss taken on V-J day in New York City.

But it's always a treat to see photos that have not been published or were not widely distributed, offering us yet another fascinating glimpse into this global war. 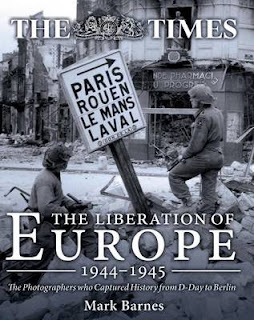 Photographers from The Times of London were part of the great media presence of the war, capturing images that helped us understand every stage of the fight to defeat Hitler. A collection of over 400 images, rarely seen or never before published, are available to you in this fantastic new book, The Liberation of Europe: The Photographers Who Captured History from D-Day to Berlin, published by Casemate. Mark Barnes, a librarian at The Times, has taken on the mammoth job of compiling these photographs from The Times photo archives to create an incredible photographic history of the campaign from D-Day to Berlin.

Photos range from military commanders Generals Eisenhower and Montgomery to political leaders Winston Churchill and King George VI, but more often than not, they are of the average soldier and airman. Each photo caption includes detailed information and the name of the photographer. The photos are sharp and clear, the pages slick and glossy. It's an absolute pleasure to thumb through this book and see yet another aspect of World War II.

This is simply a must-have for anyone interested in The Second World War. It is already available in the UK and it will be released in the US on November 14, 2016, so it will make a perfect Christmas gift for the historian in your life - or for you!
Written by Melissa Amateis at 12:13 PM 2 comments: