The Garden of Letters by Alyson Richman

One of the joys of reading historical fiction is in learning intriguing historical details. It's amazing how little-known facts can lead to an entire treasure trove of information. 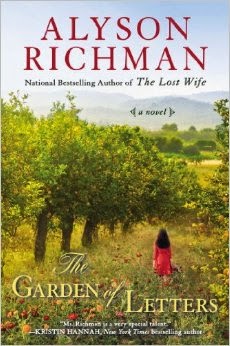 That's one of the reasons I loved Alyson Richman's latest novel, The Garden of Letters. Set in World War II Italy before and during the German Occupation, the novel centers on Elodie Bertolotti, a gifted young cellist who becomes involved in the Italian Resistance movement. As the novel opens, Mussolini is still in power, and Elodie lives a quiet life with her parents in Verona. Music is everything to her - it shapes how she sees every aspect of the world.

Things change, however, when her father is savagely beaten by fascists, and suddenly, Elodie's world view becomes skewered. She becomes involved in the local resistance movement as a staffetta. But instead of using a gun to fight her battles, she uses her cello, hiding secret codes within her music. She passes messages on to local resistance members and finds herself transforming from a girl into a woman, a woman who sees the destruction of her beloved country and cannot sit idly by and watch. But the deeper she becomes involved, the more dangerous it becomes, and when the Germans occupy Verona, Elodie must rely on all her courage to survive.

It is Elodie that makes this novel such a treat to read. Richman's characterization of her is full and rich as she expertly shows the symbiotic relationship between Elodie and her beloved music. Richman's descriptions of Elodie playing her cello are impeccably crafted, pulling the reader fully into Elodie's world.

The inner workings of the Italian resistance movement in Verona are fascinating and Richman uses real personalities in the novel. Her historical detail isn't heavy-handed, but deftly wielded to create a vibrant story alive with the feel of the time.

Beautifully written, The Garden of Letters is a wonderful read and a must for lovers of World War II fiction.