Book Review: In the Shadow of Dora by Patrick Hicks

As a Jewish slave of the Dora-Mittelbau concentration camp, Eli Hessel works on the Nazi’s V-2 missile program. Terror and death, his constant companions, make it nearly impossible to remember that he is a living, breathing human being suffering utterly inhumane conditions. He toils in the tunnels dug deep in the Harz Mountains of Germany, always hungry, always thirsty, always fighting to survive. The SS, especially SS-Hauptscharführer Erwin “Horse Head” Busta, torment Eli and his fellow prisoners through beatings, intimidation, torture, and sadistic games. Nazi scientists watch with indifference, all too willing to sacrifice lives to see the V-2 program succeed. Eli, gifted in mathematics and with a keen intellect for science, often stares at the stars and moon, wishing for escape. And then one day, miraculously, Eli finds himself liberated, the war over, and a new life ahead. But he will forever carry his old life, the burden of the survivor, the burden of the living.

Eli moves to New York, marries, becomes a father, and earns his college degrees. And then, another miracle: he lands a job with the American space program, NASA, and works at the Kennedy  Space Center in Florida. His demons, however, haven’t left; indeed, some of them are literally in the flesh: the Nazi scientists at Dora-Mittelbau are now the beloved, much-lauded scientists making it possible for the United States to have a space program.  That the men complicit in and, indeed, responsible for, the death of so many now stand as darlings of NASA without facing justice torments Eli. But what can he do? Eli tries to focus on the upcoming launch of Apollo 11, but the trauma he lives with begins to consume him once more. Is surviving really the best revenge? 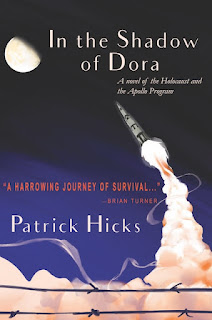 In the Shadow of Dora is as ambitious as it is profound. Patrick Hicks has a gifted ability for writing gritty, vivid realism. From the lice biting inside Eli’s camp uniform and the sickening thud of a SS guard’s truncheon on an inmate’s skull, to the clacking typewriters and ringing telephones inside NASA offices to slabs of ice falling from Apollo 11’s fuel tanks, Hicks engages all five senses with startling clarity. Hicks’ thorough research provides compelling historical details, both for Dora-Mittelbau and the Kennedy Space Center. But the power of this novel lies in how Hicks’ makes us wrestle with difficult questions. What price technology? What price justice? Why should those who inflicted pain and death upon so many escape punishment? That the U.S. government spirited away numerous Nazi scientists as part of Operation Paperclip is a         well-documented fact; less documented, however, is how Holocaust survivors grappled with this grave injustice. Through Eli, Hicks forces us to examine this issue, and we must face the disturbing answers, just as Eli must face how his past collides with his present.

In the Shadow of Dora presents a unique, compelling story of survival and endurance, one that shows how the future often intertwines with our past, and how we must never, ever give up hope that “all is well.”

Written by Melissa Amateis at 8:25 PM No comments: