Flags of Our Fathers by James Bradley 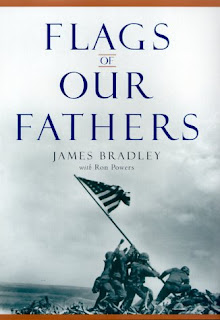 One word to describe this book: amazing.

Flags of Our Fathers is a stunning, gripping, and utterly realistic story of the Battle of Iwo Jima and of the six flag raisers who were forever immortalized in a photograph that captured the world's imagination.

James Bradley's father, Jack Bradley, was a naval corpsman - a medic - during the battle. Even though James knew his father participated at Iwo and was one of the flag raisers, he never knew the full story. In fact, he didn't discover that his father had earned the Navy Cross until after his death.

Bradley set out to research his father's life, as well as the lives of the five other flag raisers. The result is one of the best books on World War II. This is a story not about great generals or battle maneuvers, but about the men and women who participated in this monumental war. It is a deeply personal story, a story that reaches into your heart and grabs hold, never letting go, even after the last page has been turned.

These were ordinary men doing their jobs. But the flagraising photo elevated them to hero status, a label they were never comfortable with. Of the six who were in the photo, only three survived Iwo: Jack Bradley, Ira Hayes, and Rene Gagnon. After the war, their lives took drastically different paths. But they will always be bound by what came to be known as The Photograph.

Written by Melissa Amateis at 12:57 AM 2 comments: