Today marks the 73rd anniversary of the Japanese attack on Pearl Harbor. Hundreds of books have been written on the subject, but My Pearl Harbor Scrapbook by Bess Taubman is unique among them all. 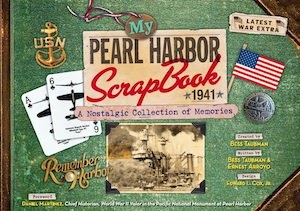 This beautiful book is laid out in a scrapbook format and includes the history of that fateful day through the use of photos, maps, telegrams, newspaper articles, stamps, and memorabilia from the war. This is history come to life. Eschewing page after page of nothing but text, this book seeks to educate through the use of a visual kaleidoscope of images. And of course, the pertinent facts of that fateful day are included but in such a way as to seamlessly blend with the imagery.

Simply put, it's gorgeously done, and a delight to the senses. Here is just a sampling of what you'll find inside:

I highly recommend this book to any World War II enthusiast, whether you are a scholar or a hobbyist. Even if you think you've read enough books on Pearl Harbor, you'll want this one for the stunning collection of WW2 memorabilia alone.

And because it is Pearl Harbor Day, here's a story from the morning that led the U.S. to enter World War II.


America's First Air Hero's of WWII  or "Just An Easy Day"
By Bess Taubman,
Author of My Pearl Harbor Scrapbook 1941

On the eve of December 6th, Lieutenants Kenneth M. Taylor and George S. Welch, dressed in tuxedos, attended a formal dance at the Officer's Club at Hickam Field. They left around 11 p.m. and drove back to the Bachelor's Officer Quarters at Wheeler Field. The usual Saturday night poker game at the BOQ was in full swing so they sat in to play. Welch turned in early. Close to 4 a.m. a weary Taylor left the game to hit the sack thinking Sunday would just be another easy day.

The men in the BOQ were suddenly awakened the morning of December 7th, by the sounds of roaring planes and loud explosions. Someone yelled "We're under attack!" Taylor, still in his tuxedo pants and a skivvy shirt, ran to the window and saw clouds of smoke and fire rising from the twisted wreckage on the flight line where the squadron's fighter planes were parked wingtip to wingtip for anti-sabotage protection -- indeed an inviting target for Japanese planes. He met up with Welch who had just called the Haleiwa auxiliary airstrip on the North Shore where their squadron was stationed. Told there was no damage at the base, he ordered all aircraft fueled and armed ASAP. Within minutes they were in Taylor's Buick speeding up to Haleiwa.

Taylor and Welch took off in their Curtiss P-40 fighter planes, climbed to 3,000 feet and flew towards Pearl Harbor. Seeing a formation of Japanese planes circling over the Marine air base at Ewa, they charged in and quickly shot down four enemy planes and damaged two others.
Having expended all their ammunition and low on fuel, they flew back to Wheeler to re-arm. Wheeler Airfield came under attack by a group of Japanese "VAL" dive bombers. Welch was the first to take off. Taylor quickly followed and as he was gaining altitude he got on the tail of a "VAL" and began firing. However, he was wounded as his P-40 came under fire from behind with a "VAL" on his tail. Taylor managed to watch his pursuer shot down by Welch who also shot down another of the attackers for his fourth kill of the day. With his plane still flyable, Taylor continued chasing after other enemy planes until all his ammo was expended. He returned to base still wearing his tuxedo pants.

Both Army pilots were awarded the Distinguished Service Cross for their outstanding acts of heroism on a Sunday morning that turned out to be "not just an easy day" after all.
© 2014 Bess Taubman, author of My Pearl Harbor Scrapbook 1941

Author Bio
Bess Taubman, author of My  Pearl Harbor Scrapbook 1941, combines her unique talents as writer, designer and publisher creating dynamic, educational products about historical subjects. She has been writing about the Pearl Harbor story for over twenty years. Presenting the reader a unique way to learn about complex subjects, Ms. Taubman is helping to reshape the way historical information is introduced with colorful vivid story lines. This is her first book. She lives in Phoenix, Arizona with her husband and daughter.