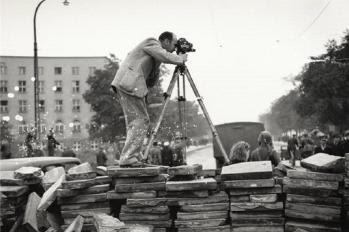 Want to watch the Nuremberg Rallies online? Or see color footage of the Warsaw Jewish quarter in 1939? How about the liberation of Buchenwald?
It's all here.
The Steven Spielberg Film and Video Archive at the U.S. Holocaust Memorial Museum offers a vast resource for scholars and enthusiasts of World War II history. The Internet has made it possible to share these fascinating videos with the world, offering an amazing, sobering, and sometimes horrifying glimpse into the Holocaust and other aspects of World War II. This online catalog provides more than 800 hours of film, primarily from the 1920s to 1948:
Here's a list from the website of just some of the topics covered:
--Prewar Jewish and Roma/Sinti (Gypsy) life
--Germany in the 1920s and 1930s the Nazi rise to power
--Nazi racial science and propaganda
--Persecution of Jews in Nazi Germany, occupied territories, and Nazi puppet states
--Deportations of Jews to ghettos and concentration camps
--Internment camps
--Resistance movements
--Tthe liberation and disclosure of Nazi concentration camps
--Refugees in displaced persons camps
--War crimes trials, including the Nuremberg Trials and the 1961 trial of Adolf Eichmann
--American responses to the events in Europe from 1933-1945, incl. rallies, protests, speeches, & newsreels coverage
Definitely worth a visit.

Written by Melissa Amateis at 8:52 AM 14 comments: