As I sit here on my couch and gaze outside at the beautiful spring morning, a mourning dove coos, my Snoopy flag wafts gently in the breeze, and my two cats drowse under my chair.
There is no gunfire erupting, no house-to-house combat, no tanks rolling down the street, no riots.
It is calm. Peaceful. Serene.
This is what freedom looks and sounds like.
And men and women fought and died so that I may enjoy it and live my life in such a way as I see fit.
To those who fell in service to their country, sacrificing their lives, I say, Thank you. I will never forget.

Written by Melissa Amateis at 8:40 AM No comments: 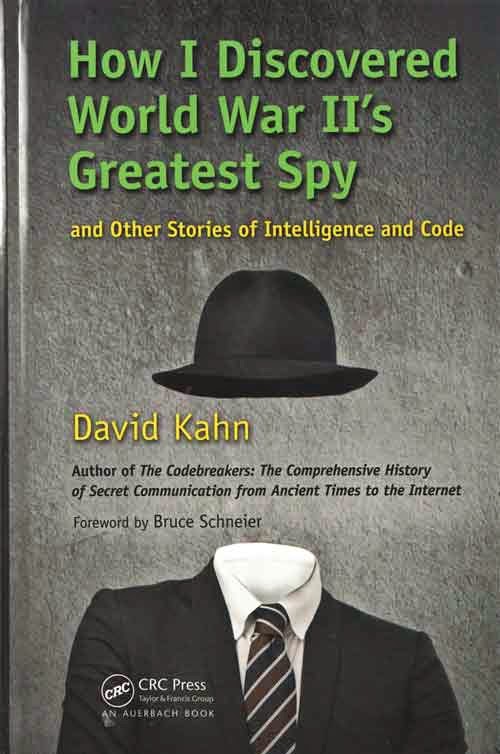 Ah, espionage, that shady world of codes, shadowy figures, and vital information. Warfare isn't the same without it, and some say, wars cannot be won without it.

David Kahn, arguably the expert on intelligence, brings together several stories of World War II espionage as well as other fascinating tales of secret communication in How I Discovered World War II's Greatest Spy and Other Stories of Intelligence and Code, published by CRC Press.

This book is a collection of some of Kahn's previously published essays, a handy volume for finding out some of the best of Kahn's work. Many articles appeared in scholarly publications that are not readily accessible to the general public, and this is indeed welcome news to historians of military intelligence, both professional and independent. Historians and researchers will especially appreciate the meticulous notes for each article.

Kahn's articles provide a wide range of topics. Some tackle more intriguing questions that have haunted us for years such as this classic: Did President Roosevelt know about the attack on Pearl Harbor? He also addresses a similar conundrum in why Nazi Germany's supposedly "superior" Aryan spies were absolutely awful in the intelligence game.

Enigma, The Cold War, and the intricacy of cryptology are examined, as well. Thus, this book isn't just for World War II enthusiasts, but anyone who is intrigued by intelligence and espionage. Kahn's writing is superb, drawing you in immediately, and holding your attention long after bedtime has come and gone.

If you'd like to win a copy of Kahn's hardcover book, here's how to enter! Just do ONE of the following and you'll be entered to win!


Giveaway is open to U.S. and U.K. residents only.

Winners will be notified via Twitter or email. Contest ends at midnight May 20, 2014. No purchase necessary to enter.

The winner is Valerie Gerlock ‏@MightBeValerieG !

Thanks to all for entering!