Wartime brings out some of our strongest emotions, but arguably one of the most powerful is love. With the very real possibility of death hovering over them, men and women of the 1940s often rushed to get married before the soldier shipped off to war, or made a commitment to marry once the war was over. They often wrote ardent letters to each other full of dreams of the future. Those letters became the glue that kept them together when the fighting, the waiting, and the separation became too much.

War Bonds: Love Stories from the Greatest Generation by Cindy Hval brings many of those stories to life. A journalist, Hval gathered 36 stories from men and women across America and compiled them into this wonderful volume. 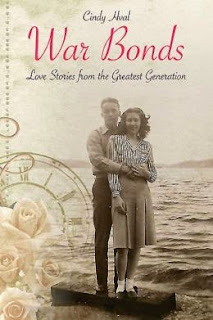 Each story features wartime photos of the couples, as well as photos of their lives together 70 years later. This is perhaps the most poignant feature of the book, to see how their marriages have lasted for more than half a century. They will be the first to admit that it certainly hasn't been a bed of roses, but has taken commitment, strength, courage, and devotion to stay together through thick and thin.

There's Jerry and Nancy Gleesing who married and were expecting their first child before he was sent overseas, shot down over Hungary, and taken prisoner by the Germans; Gene and Evie Fields who waited to marry until Gene came home, carrying a Purple Heart he earned from wounds received in Italy; and Dean and Betty Ratzman who met as college students on a blind date in 1943 and married in February of 1946. These are just a small sampling.

Included with each story is a snippet of relationship advice from the couple, and it is here that you can catch a glimpse into the truth behind their marriage's longevity.

War Bonds is truly a heartwarming read, one that will renew your faith in commitment and marriage itself.

Written by Melissa Amateis at 5:30 AM