Do We Need an Enemy? Guest Post by Lisbeth Eng 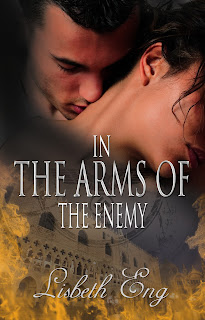 Since the end of World War II, all of our former foes are now staunch allies: Germany, Japan and Italy. Even Russia, our WWII ally, turned enemy during the Cold War, is back to being a friend (or at least a cordial acquaintance). Germany, often seen as the most evil entity of World War II, is now our partner in Afghanistan and one of the leading democracies of the world. This is not an accident. I believe it proves that people are people, though politics, circumstances and occasionally an insane leader (i.e. Hitler) can turn an entire nation into an enemy.


My recently released World War II romance novel, In the Arms of the Enemy, takes place in 1944 Italy and the characters are Italian partisans, Italian Fascists and German soldiers. At this point in the war, Italy has surrendered to the Allies and Mussolini has been deposed. Mussolini is imprisoned, then “rescued” by German commandos and brought to Germany for an audience with Hitler. The Führer convinces Il Duce to return to Italy as a puppet dictator, while the German army takes control of the north, and tries to hold back the Allied forces advancing from the south. The Italian Resistance fights the Germans and their Fascist allies by any means possible. Though not recognized as regular combatants under international treaties in effect at the time, they participate in combat against the German forces, as well as in sabotage and espionage missions.

Isabella Ricci, the heroine of In the Arms of the Enemy, serves her country as a member of the Italian Resistance. She has been an anti-Fascist for years, but her zeal is inflamed after she witnesses the unjust execution of her own brother by the Germans. She does not engage in combat; she is a spy. Her mission is to seduce a German officer into revealing military secrets, which she then passes on to her comrades in the Resistance. Further complicating matters for her is the fact that her boyfriend and commander, Massimo Baricelli, sends her on this espionage/seduction mission.

There is no individual villain in my book. The principal characters, whether German or Italian, are portrayed as human beings with their own personalities, strengths and flaws. I do not gloss over the atrocities committed by the German army in Italy between 1943 and 1945. I allude to them, but that is not the main focus of my book. I have done extensive research on the war and the Holocaust and have read perhaps a little too much about all the horrible things Germans did. But I have also researched ordinary German soldiers and have read their memoirs. There was a German Resistance, unfortunately rather unsuccessful in defying National Socialism in their country. An excellent introduction to the subject is Conscience in Revolt – Sixty-Four Stories of Resistance in Germany, 1933-45 by Annedore Leber, available in English translation from Westview Press.

But the German Resistance is not the focus of my book either. In the Arms of the Enemy is the story of ordinary people who, either by choice or circumstance, are caught up in the horror that was World War II, and how these human beings react to the situation in which they find themselves.

As a people, do we need an enemy? During wartime, the enemy is clearly defined. Looking back on World War II, we Americans can pride ourselves in having helped defeat one of the most evil men of the 20th century, Adolf Hitler, and halting his aggression. We have since become close allies of Germany, our former enemy, and were instrumental both in helping the decimated people of that country rebuild after the war, and in German Reunification, celebrated almost exactly twenty years ago. Old enemies have become friends and partners.

Today, the US is again at war, and we currently have new enemies. I can only hope that someday, as we did with the Germans, Japanese and Italians, we can put that enmity aside, form fruitful partnerships and forge peace. Millions of people – Americans, Britons, French, Poles, Soviets, Jews, Germans, Japanese, Italians and countless others – perished in the Second World War. Perhaps war is an unavoidable consequence of human existence. Perhaps war itself is the enemy. But I continue to hope for peace and reconciliation.


BIO: An English major in college, Lisbeth Eng has also studied Italian, German and French. Lisbeth is a native New Yorker and has worked as a registered representative in the finance industry for the past 25 years. Her first novel, In the Arms of the Enemy, is available in e-book and paperback at The Wild Rose Press. Lisbeth invites you to visit her at http://www.lisbetheng.com/.
Written by Melissa Amateis at 6:05 AM

Congratulations on the new book! I hope it's a success!

I like your observation about the world becoming more democratic, I think that's very accurate. Despite whatever cultural differences may exist, people ultimately do choose freedom and having control over their government.

Congratulations on the book. My father served in Corsica during WW II. I was, and remain, fascinated by the many black-and-white photos taken from his time there as a GI.

I too long for world peace. Whatever happened to brotherly love?!

Congrats on the book. Can't wait to finish it. I have my favorite in this lover's triangle. ---Mferrer

This sounds like a fascinating story, Lisbeth! And I know what you mean about depicting the enemies as real people.

I write American Civil War romance and in most of my stories, the lovers are on opposite sides of the conflict. But it works because no one side is demonized. They all did what they did because they believed they were in the right, even if their goal is just to serve the leader they follow.

Very interesting post. I have a good German friend and it's hard to imagine we could have been enemies in my parents' generation. Have you seen the movie 'Gloomy Sunday'? It illustrates how friends turned into enemies overnight as politics claimed their loyalties.
My book FRENCH KISS, also published by The Wild Rose Press, is about the French Resistance, set in Normandy, 1944. Doing the research was fascinating.
Conflict is horrible but seems to be a necessary part of human existence in the struggle for growth or change.
Melissa - I see that you list 'The Last Samurai' as one of your fave movies - you may be interested to know that it was filmed in my old home town/province of New Plymouth, Taranaki, New Zealand.
Cherie Le Clare
www.cherieleclare.com

Thanks, everyone, for your thoughtful comments on war and human conflict. I'd like to think that what we are doing right here -- communicating ideas -- is a step towards peace.
Thanks so much, Melissa, for inviting me to blog with you!
Lisbeth

Hi Lisbeth,
A great blog. It is quite amazing how the hatred between enemies has now turned to friendship. I guess human nature being as it is, each side thought they were in the right.
WW2 is a fascinating backdrop for a love story, hearache, triumph, bravery and fortitude.